One thing that I like about dancing in the US is that we get to do street fairs. In Indonesia (well, I don't know about Bali), bellydancers are typically not that well-regarded. And people who go to street fairs here are generally laid back. Blue Diamonds Belly Dance, student troupe of FatChanceBellyDance® has been doing lots of street fair gigs lately, and I danced in two of them in my 'hood (Rockridge and Berkeley).

Here are some tips.

Sometimes you'll be dancing on asphalt. So wear appropriate footwear. I was tempted to wear my Asics running shoes, but the soles are too grabby, and since I don't wear skirts, my footwear shows (especially when I'm spinning), so in my opinion, sneakers kind of ruin the aesthetics.  I used to have a pair of gold gladiator sandals, but they were so cheap and not made for dancing that they broke apart after six performances. Then I bought another pair of gladiator sandals, but they made my ankles bleed. And one time, one of them came off mid-performance, and it was really stupid.

Then I found these awesome knee-high boots on eBay. These are vegan boots by Breckelles. At first I thought they were so slippery, and I don't like the way they clack clack clack when I'm walking, but turns out, the soles are not grabby, and they're perfect for dancing on pavements and asphalts. 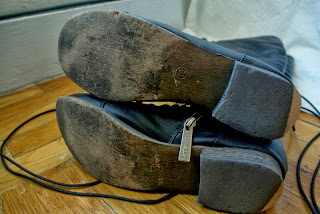 Then there's also the issue of dancing in sunlight. Our performance time for both fairs was at 1 PM. So yeah: the sun is relatively right above you, which is kind of good since you don't have to turn and spin and bam! the sun is right in front and blinding. But that also means that you'll get tired more easily (what with the headwraps / turban / head gear, and squinting is really exhausting), so don't wear too much jewelry like I did at Berkeley Sunday Streets. Seriously, I almost could not keep my elbows up in the final song of the first set (we danced to two sets). I got home and out of curiosity, I weighed my bracelets that I wore to the Berkeley gig, and I realized I was wearing 2.7 pounds of jewelry on my arms. Yikes. But it's a good work-out for your shoulders, back, and delts. 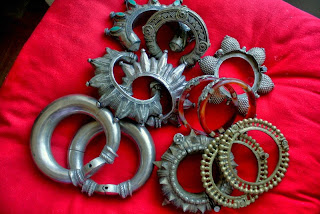 Now about squinting, and this is probably just the shape of my eyes, I really don't like the way my eyes sort of disappear in action shots. So you may want to consider eye make-up that makes your eyes look big even as you squint (is that even possible?). And no, I'm not talking about this:

Finally, cover-ups. With a shining sun and a typical Bay Area breeze, I'd recommend wearing assuit / tulle-bi-telli. The cool metal keeps your body temperature low. But if it's too cold, then use something else.

as shimmied by famousfeline at 14:47:00 boxed in: accessories and costumes, advice and note-to-self, ats - its - tribal, bdbd, performances, san francisco