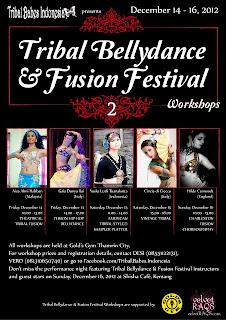 To be honest, creating a workshop is so much like editing: it's really, really hard. Workshop is about picking and choosing things, what will work, what won't, what will bore the shimmies out of the participants, what will match the overall level of the dancers, but most definitely, what you want your participants to take away from your workshop.

Teaching ATS® is something new to me. During my time in the US, I've only been a student, and I enjoy doing that. I enjoy having that somewhat carefree attitude: I'm here to learn, and not to teach. I mean, I do have the responsibility to improve my skills (which include not only my posture and techniques, but also musicality and how I interact with other dancers on and off the stage - to some degree).

Here's the thing, ATS® is also something new, if not foreign, in Indonesia. The Indonesian belly dance scene is still heavily saturated with Cabaret / Oriental, which I also love, but perhaps will no longer be performing, except perhaps for Fusion. Tribal Fusion is also trending right now, but some dancers are not exposed to what "Tribal" really is. The whole concept, and that is the leading and following concept, is something unheard of. However, leading and following is the very essence of ATS® and I want to get that point across.

I talked over the phone with Ms. Nericcio during the week when she was teaching in Michigan. I told her the dilemma I was facing: I would like to keep it interesting and challenging (because somehow I'd thought that the mentality of the Indonesian dancers was to gain the most in terms of quantity and repeating and drilling the same moves over and over again would bore them to death) while teaching them what "Tribal" stands for in American Tribal Style® (and its offshoot - Tribal Fusion).

Here's the gist of what she said: keep things simple.

I told her that the Sampler Platter class was designed to have three sessions. The first one focuses on Slow Moves (first and foremost the Puja, then posture, arm placement, Floreos, Arm Undulation, Taxeem, Bodywave, and probably throw in some fancier stuff like Reverse Turn or Corkscrew Turn depending on how fast the participants could absorb the more basic moves). The second one is all about Fast Steps (Egyptian, Arabic, Pivot Bump, Shimmy, and Turkish Shimmy). The third one can either be a review of all the Fast Steps and Slow moves or a Shimmy drill (which I love).

At Mihrimah's workshop two years ago, she did a very cool thing where we would form a chorus, and one by one, we would come in from the left, move to the center, lead the whole chorus for a couple of eight counts, then fade to the right so the next person could take over. That was really fun and inspiring and I tweaked it a bit to match the ATS® concept.

At the end of each session, I would pair two dancers in a duet and have them dance together for one song, to review the moves on their own (they wouldn't need to worry if they made mistakes - I told them to be confident and that they was to always follow the leader), then the participants would form a chorus, and each duet would dance as featured dancers for a while.

This seemed to work at my last workshop. I mean, obviously I couldn't get the participants to have the perfect posture and techniques (heck, even I am still learning), but I managed to get the Tribal point across.

Ms. Nericcio's advice was this: get people excited. This was particularly true. I remembered how the lifted elbow posture was especially excruciating but the participants seemed to enjoy it, part of it was because they felt challenged. Once people are hooked, they will become curious and want to learn more.

However, there are also those who just want to get introduced to ATS® and see if it's really for them or not. This is fair game. I had a lady who asked me in my workshop, why we only did Pivot Bump on the right hip. She said that it would not train the muscles on the left hip. Carolena's advice for this one was to let them know that using the left hip does not complement the ATS® aesthetics and concept (leader on the front left). Also, bumping with the right hip doesn't mean that we're not exercising the left hip. Both right and left obliques are being used. Based in my experience, my Pivot Bump gets bigger if I also engage my left oblique muscles every time I release my right hip. I hope this makes sense.

One thing for sure, though: Puja is an essential aspect of ATS®. It helps ground the dancers and remind us of our roots. This is why I always start each session and end the third and final one with a Puja.

I can't wait to go back again to Jakarta and share the beauty of American Tribal Style®. 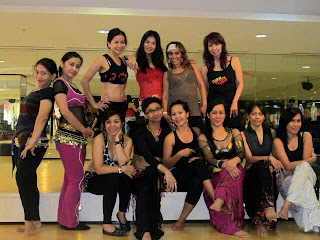 There have been times when I felt I was the luckiest boy on Earth. As socially awkward as I am, I know a thing or two about American Tribal Style® belly dance, and that's about it.

Lucky for me, I have the opportunity to stay in the East Bay and take classes at the FatChanceBellyDance® studio. I get to dance with the student troupe, Blue Diamonds Belly Dance, and last February, I had the honor to perform with some members of Blue Diamonds along with two of my teachers, Wendy Allen and Kae Montgomery, at Tannourine. 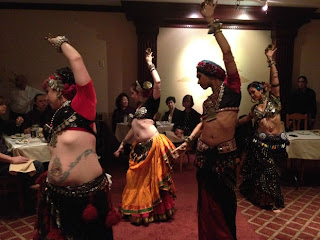 Then of course there was the Devotion Kickstarter Party at Bissap Baobab Village last month. I just had to dance at this event because I won't be able to make it to this year's Devotion Show. Dancewave Center collaborates with Gedung Kesenian Jakarta for Jakarta's Anniversary Festival on June 15, 2013. More on this later. 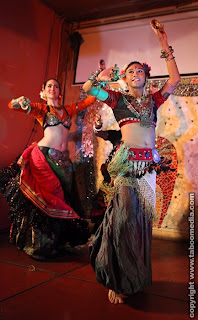 In orange choli is Larissa Archer, yes, she's the daughter of The Masha Archer

But the real treat was this year's Cues & Tattoos.

You see, some of the Blue Diamonds girls thought that it would be sweet to dance at Cues & Tattoos as some sort of a farewell for me (I thought I was going to leave the USA for good somewhere in mid 2013, but that won't happen because I'm staying at least for another year to get a dual degree in nonfiction. Yes).

So there you have it: Taksu Tribal. "Taksu" is a Balinese word which means "good energy" or "spirit". I'm going to leave the video right here so you can see for yourself if we have Taksu.

Addendum: Just to rub it in, here's what Ms. Nericcio wrote about Taksu Tribal. 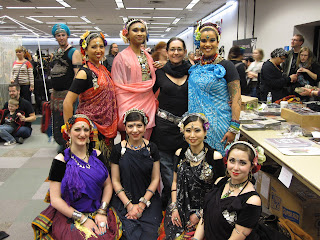 So I told Rob / Valizan that I was going to go to Cues & Tattoos. He rounded up two other boys who were based in Seattle (Russ Martin & Rich Williams). I've met and danced with Russ at the FCBD® studio when he was taking General Skills & Teacher Trainings. He has killer Layback. I'm friends with Valizan and Rich on the Internet but never actually danced with them before. But you know, it's ATS®. It only took about two hours of getting used to dancing with each other and BAM! Sons of Trimurti was on the stage.

Katherine Erickson (owner of the fabulous Silk Road Tribal) said that when Sons of Trimurti danced on stage, the shopping stopped. The only time she'd seen that was during Suhaila Salimpour's troupe performance.

I'm still waiting for a video, but for now, here are some of the photos of Sons of Trimurti. (Purple: Rich Williams; Gold: Rob Galbraith / Valizan; Turquoise: Russ Martin) 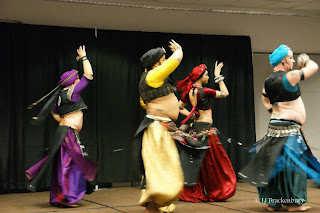 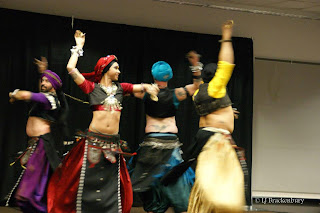 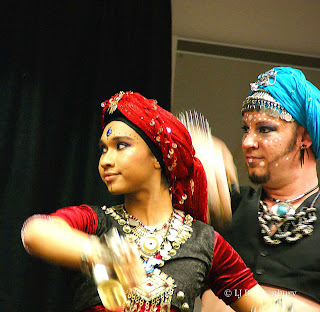 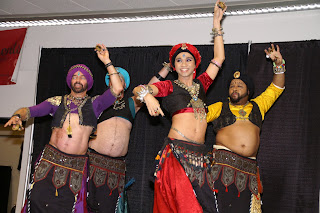 Photo by David of CheekyMonkeyCaravan

Seattle was uncharacteristically sunny and warm. So here's a photo of Kitty, my faithful companion for more than two decades, in front of the Space Needle. 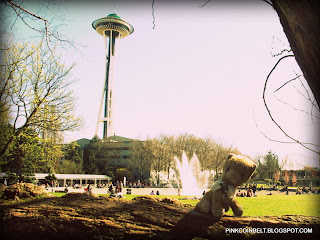 There will be a review of the festival as well as some pictures from the Instructor's Showcase very soon!

I'm going to end this entry by quoting a line from Bridget Jones's Diary:

It is a truth universally acknowledged that when one part of your life starts going okay, another falls spectacularly to pieces.

And of course vice versa.