My troupe is set for three performances in the upcoming two weeks. One on Saturday, another one on the next Saturday, and the last one on the Sunday. Performances mean so many things for us, or for me, at least. We get to put on our costumes, put on our make-ups, show off our moves, study our moves and mistakes (if any) later on (in the video), have a chance to show our existence, get more stage-time and experience, and of course get paid.
I was excited. My costume was almost ready (except for the white top with white/silver paillettes and sparklies that will make me look like a belly dancing member of the Ice Capades) and I got the moves right.
We were already confused as to why we were hired by one big gym franchise while the events are organized in places that not only not have those gym clubs, but the competing gyms of big names. But we brushed the thought aside and were even excited that we could perform and be seen by people from other gyms.
And then one night as I was returning from teaching, I received a message from my teacher. Apparently, the organizer was not our gym, but a fitness equipment manufacturer and distributor. And the organizer only wants female dancers. I was disappointed. Sad, even.
I mean, everyone knows I'm a total show-off and attention whore. And desperate for dough.
But seriously, folks, Oriental Dance is a dance for everyone. Male, female, gay, straight, stick thin, slim, standardly built, voluptuos, curvaceous, plain big, tall, short, young, old. Heck, I even know dancers with bipolar syndrome and one foot that's shorter than the other.
And that's right. That's exactly what it is. This is a dance that demands everything from you but keeps you liberated enough to not care about those things above. Oriental Dance can be as low impact as walking (gorgeously, that is) to medium-high (shimmies, powerful accents). And yet everyone can do it, unlike the the more complicated dances like salsa or hip hop (I know I can't). But don't get me wrong. Oriental Dance is just as challenging. I know dancers who've been dancing for a long time (modern, contemporary, hip hop, salsa) that can't dance Oriental.
However, when it comes to being hired or dancing semiprofessionally or professionally, you have to be ready for the ultimate challenge: the rejection because of the said points above.
And I have been rejected for being a male.
I can deal with the rejection. But I can't help but think the reasons I got that kind of reaction. And so I formed three theoretical answers:
The answers above are very much related to the organizer's knowledge about Oriental Dance and the men who dance it. And I should say it's right next to nothing.
But on a lighter note, thank goodness I haven't worked overnight to finish the white top.
Email ThisBlogThis!Share to TwitterShare to FacebookShare to Pinterest

as shimmied by famousfeline at 12:50:00 boxed in: performances, ramblings 2 comments:

fusion confusion and the trouble with tribal...

... Is that people think it's just doing the ooey-gooey stuff like Rachel Brice, or dressing up with flowers stuck in their hair and big chunky bracelets and armlets, or doing that crazy layback drop (again) like Rachel Brice, or having tattoos (preferably on the stomach area), or mixing styles from all over the world and call it Tribal Fusion.

To me, "Tribal" is not that easy. I don't care if people call me a Tribal Purist. Heck, I don't think I even want to take "Tribal" workshops from dancers except from The Indigo Girls, Naimah (yeah, right, when is she coming here), Elizabeth Strong (she's coming to Malaysia next year! Aaarggh, gotta save money!!), and possibly some of the BDSS Tribal Dancers, but just because I've seen them dance. God knows how much I want to study from Zoe Jakes and Mardi Love.

The thing is, when I had that crashcourse on "American Tribal Style" (ATS) and "Tribal Fusion" with Ms. Joe in Tokyo, I was exhausted. Especially my upper body parts like the shoulder blades and my arms. The posture kills me! But That's why I love ATS.

And then we began training on "Tribal Fusion". She had prepared two choreographies: one Tribal-Jazz and one Tribal-Hip-Hop. We didn't have time for the Hip Hop one, so we tried out the jazz. Did I like it? Yes, a lot. Although I've two left feet for jazz. But I liked it because the choreography was so rich. The repetitiveness was minimal and 98% of the movements is oriental.

In my opinion, it's really important to step in on the right track at the beginning, and that first step is Oriental.

There's nothing to argue, really. Even ATS is largely influenced by oriental dance. Where else will you find figure eights, shimmies (particular shimmies, not like the salsa ones), and camels but in Oriental?

Ms. Joe constantly reminded me to always ground myself and make the movements look earthy, by doing things flat footed (doing flat-foot maias look so different than doing them while lifting your heel alternately) and not being too bouncy. Unmata dances to fast music so they couldn't help but being bouncy, but there's still the earthy quality in their dance (possibly because those girls don't shave their armpits, but hey, why should they anyway?)! And I find Sharon Kihara the bounciest, at least in her performances in the Tribal Fusion Fundamentals and her Instructional Video. And I don't like that.

And some people think "Tribal" is... "Tribal". They praise the dance without even knowing the very existence of ATS's Tribal Pura (FatChance Belly Dance's collaboration with Devyani Dance Company) or "Improv Tribal Style" (ITS), the more international form of tribal cues.

But one thing is certain. You can't wear a bare-midriff outfit and do whatever style it is, throw in figure eights for eight counts in a song that's five-minute long and call it "Tribal".

Sorry for being so bitter, but I just can't stand people who say that they do "Tribal" just as an excuse not to learn about Oriental, or worse, not to learn about ATS. Granted, there's no ATS class here and you have to have at least one partner to perform ATS (or ITS), but at least know where "Tribal" sprang from, forgodssake.

And I'll bet lots of "tribalists" have never even heard of Jamila Salimpour, Bal Anat, Masha Archer, or Carolena Nericcio. 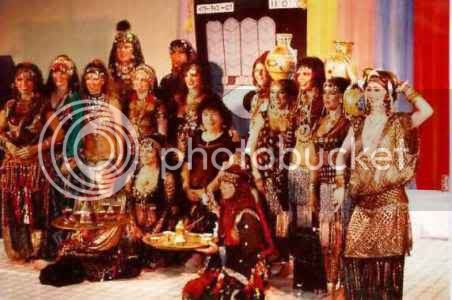 Just for your information, Carolena Nericcio has been doing that layback-drop way before Rachel Brice. And don't get me wrong, I love RB and have a lot of respect for her. She's clearly taken Tribal Fusion (or as she labels herself and the Indigo now, "Burly Fusion") to a new level and helps promote Tribal, Tribaret (Tribal Cabaret), and ATS and ITS to a new level.

I feel so bitchy right now.
Email ThisBlogThis!Share to TwitterShare to FacebookShare to Pinterest