what do they think of us?

Last week was one of the pinnacles of my dance career, dancing American Cabaret three nights in a row. It was supposed to be four nights, but the Samarra people cancelled the event. Needless to say, the experience was not only fun and exhausting (not the dance part, two of the venues were located so far away from home that getting there was challenging), it also brought my dance sisters and me closer together, what with the endless hours of waiting for our turn to dance and the late supper and juicy gossips afterwards.

It is ironic how some simple (and sinful) gossips can lead you to evaluating yourself. After the second performance night, I went back with my teacher and one of my dance sisters. I drove and we shared tips from other experiences, listened to good drum solo songs for future haflas, and talked about other troupes and classes.

My teacher gives courses in different places and teaches different levels. Some of her students have seen us in our Shimmering Shimmies hafla earlier this year. It surprised me to know that our group (since we don't have a proper troupe name) is called by my name & co. So instead of my teacher & gang, it's Yuska & gang. Despite the pride, I also feel a bit worried about the image. I mean, when alone and not dancing, I won't be bothered by it. But in dancing, I have a mission to educate people on what belly dance, and more specifically a guy doing belly dance, is all about.

I don't just shake my hips. I learn how to move in unison with the song. I learn props like veils, zills, and the scimitar and how to handle them properly (although I have failed lots of times due to the lack of practice). My teacher always strives to improve us, always checks the details. I have dance sisters who are so zealous about blocking and positions. One other sister always thinks meticulously about the costumes. Me, being a nerd, I'm always interested in sharing the details about the history of the dance.

Granted, no one can ever clearly define what makes a dance be called a belly dance. I mean, there's the costume for a start. Most dancers when they're not dancing a folkloric piece, use the two-piece bedleh with the optional body suit. Many dancers for whatever reasons (mostly aesthetical), prefer the one-piece costume. Some dancers prefer to wear pants, others skirts, others skirts on top of pants. Costume-wise, however, I think all belly dancers in general wear some kind of a belt or a scarf tied around the hips to accentuate the torso movements. Some wear coined hipscarfs while others wear fringed hipscarfs.

However, costume is not the only way to distinguish whether one is dancing Middle-Eastern Folkloric style, Egyptian style, Turkish style, Lebanese style, American Cabaret style, American Tribal style (ATS), Tribal Fusion style, or even belly dance at all. Read this one website that so aptly writes about costuming (and something with a TV repairman putting on scrubs and suddenly he's a heart surgeon. Wouldn't want to risk your life on it, would you?) 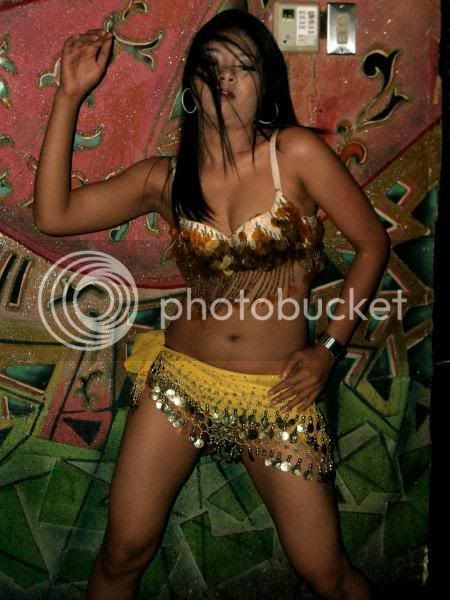 She seems to be forgetting her skirt. Or pants.
And I am so going to shoot whoever sewed the paillettes on her bra.
Sadly, this photo was taken at a party somewhere in Indonesia.
So I suspect that the Asian-looking girl is Indonesian. *sigh*

Obviously the girl in the picture above, although she's wearing beaded bra with sequines and a coined hipscarf, she is not doing the belly dance, because no belly dancer would ever be caught dead with no proper bottom garment. Nice tummy, though!

The next visible thing that can differentiate the belly dance with other styles of dancing is the extensive use of stomach muscles that may or may not include isolations. There is a school of thought that believes Egyptian style belly dance does not restrict itself to crazy isolations like Western dancers do. Think of Taheya Carioca vs. Sadie or Samiya Gamal vs. Ava Fleming. I have seen performances of ATS and they have smaller, more defined movements.

I think the isolation is the core reason why some Tribal Fusion style dancers look a lot like break dancers (Sera from Solstice comes to mind - just look at her end performance in the East Coast Bellydance DVD. It's more to break dance instead of belly dance. Dusty in Bellydance Superstar's Tribal Fusion DVD is also doing it. Still very cool, though, but it's not belly dance).

But if you're talking about Rachel Brice, now that's isolation. She's indeed very earthy and serpentine-like, even in her "bouncy" drum solos. Sometimes I prefer watching Sharon Kihara (that girl seriously has cool shimmies) to Rachel. And like Ms. Joe, my teacher in Japan said, Kami Liddle and Mardi Love are so going to shine new lights to Tribal Fusion scene. Kami is soooo gorgeous and I am so loving Mardi! Zoe Jakes has some crazy fast turns that I think I can never master. Then again, no one can beat Carolena Nericcio or Kajira Djoumahna (although I think Kajira's Mo' Rockin Hip Hop movement is a bit awkward).

Now let's put ATS and the offsprings (Tribal Fusion, Tribal Gothic, Gothic, etc) in a box and return to Oriental. Indeed, "Oriental" refers not only to the Eastern countries such as China and Japan, the origin of the word actually describes something that is not Western (European). And that includes the Middle East. In some cases, if you listen to Middle-Eastern music and compare it with Chinese music, especially those with strings (whether using instruments like the guitar, violin, or harp), you can hear striking similarities in the chords.

The biggest groups of the Oriental style belly dance are Egyptian style (that may include Egyptian Cabaret style), Turkish style, Lebanese style, Greek style, and American Cabaret style. If you are a big fan of Bellydance Superstars Live in Paris DVD like me, based on my (unfair) classification and other dancers' opinions, you'll notice that Jillina can be classified as having Egyptian and Egyptian Cabaret style. She also sometimes incorporates traditional dances such as the Khaleegy (Raks al Na'shar) in her drum solos.

Sonia's gracefulness and her movements that I consider as heavily influenced by ballet and jazz remind me so much of the era the bellydancers call the Golden Age of Belly Dance. That's when the great Lebanese dame Badia Masabni opened her Opera Casino in Cairo and recruited such dancers like Taheya, Samiya, and Fifi Abdo. Therefore I classify Sonia as an Egyptian style dancer (if only she would smile once in a while).

Amar Gamal, another incredible dancer with the best shimmies I've ever seen, probably falls into the category of Egyptian cabaret style dancer. Like Jillina, Amar Gamal also incorporates serious isolations, instead of more flowing movements like those of Sonia's. In her DVD "Mastering the Dance", Amar Gamal shows heavy influences from jazz.

From the very first time I watched the Bellydance Superstars DVD that features solo studio performances, I fell in love with Ansuya. I later realized that she dances American Cabaret style. I have the same attraction to dancers like Anaheed and Salome. They are not balletic, sometimes even rigid. But their movements are powerful and showy, with uninhibited (but still cool and coy) facial expressions. I'm a Leo and I love performing with a sense of pizzazz, so I'm more drawn into American Cabaret (AmCab, or also known as American Oriental). AmCab dancers, like ATS dancers, use zills extensively too. 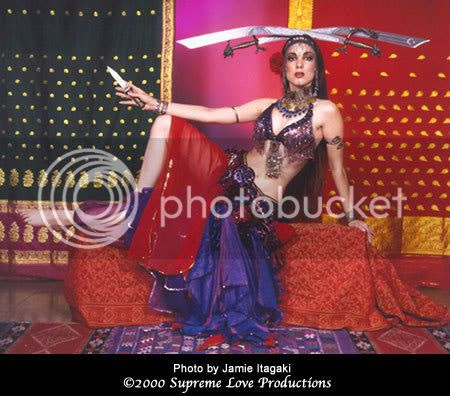 That's Ansuya.
Oh, and did I mention that her drummer boyfriend, Ozzie, is a hottie?
Yeah. Talented AND lucky. Her mom is the Jenaeni Rathor,
one of the most famous Am-Cab dancers in the American circuit at that time.

I can go on and on about other styles of belly dance. Like Didem Kinali or the legendary Sema Yildiz for Turkish styles. Sema even puts lots of Turkish Rom dances in her performances, making it even more distinct and authentic. I especially love Sema's performance with the Turkish hottie Ozgen. 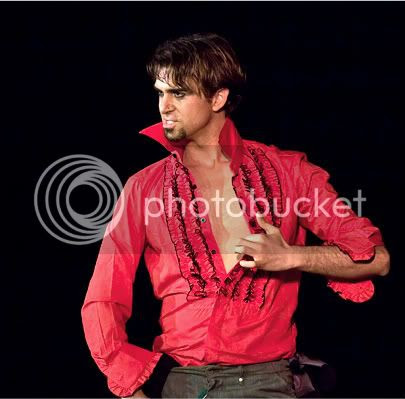 Ozgen. *shudders*. I think in this picture,
he's dancing the Turkish Rom style, not a typical Turkish bellydance.
He usually wears his chestless costume when performing the belly dance.

But let me just get back to the topic. When my teacher, my dance sister and I were gossipping, suddenly my dance sisters asked what they thought about Yuska & gang.

The first performance night was not so good. It was for a birthday party of a friend of a student of my teacher's. The crowd had no idea what belly dance was (or is). When we stepped into the venue and the dressing room, I saw a guy crossdressing in a two-piece bedleh. Apparently, he was the emcee for the evening. I had realized that it was going to be a nightmare. And I was right.

The crowd was okay, but it was the emcee who kept badgering us, giving us freaky and degenerating hoot calls. In the end of our performance, he went into the middle and did some disgusting sexual display. We left the dance floor, of course, cursing tongue-in-cheek. It was a test to our professionalism and we succeeded in putting our best faces forward. No frowns. It was just work.

However, it was really disappointing to know that some people still regard belly dance as a just a sexy dance. I am never going to say that belly dance is not sexy. Hell, I even think Wade Robson is sexy and he dances a different style of dance that I do. What's more saddening was the fact that there are people who force the notion that belly dance is supposed to be sexy in a vulgar way. Like the said emcee. 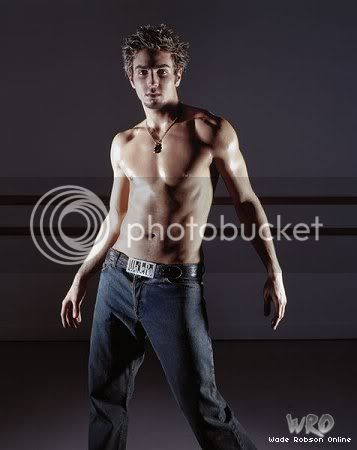 Wade Robson. Although too skinny for my taste, I still think he's hot.

Then we questioned ourselves, what do other belly dancers think of us? Do they know that we're dancing American Cabaret style? Do they dismiss us and saying we're the bad dancers and that their way of the world is the right one?

As for my teacher, my dance sisters, and myself, we always try to respect other belly dancers if they know what they are doing and what kind of dance they are performing. I've had Egyptian style teachers and although I enjoyed learning from them, I have made up my mind that Egyptian style is not the one I am going to do.

Whenever I substitute for my teacher to teach the very basic class of Am-Cab at her studio or cardio belly dance at the gym, at the end of the class, if there are any students or participants asking me about the dance, I always try to explain to them the many varities of the belly dance and that at the gym, it's just for cardio exercise, not really dancing. If they want to learn Am-Cab, go to my teacher in her studio. If they want to learn Egyptian style, go to another teacher.

The truth is, tolerance is needed, at least in the Jakarta / Indonesia belly dance scene. We hardly know each other, some of us compete by bad mouthing each other and stabbing the back of one another without realizing that we're creating our own little war.

My teacher and I have always dreamed about creating a hafla where all belly dance teachers and their students can perform without competition. After all, it is a hafla, not a belly dance championship.

Oh, but not to worry. The other two performance were done well. The crowd was lovely and the pay was good. Not as good as the first one, though. It seemed as if the first one had bought our pride in exchange with a hefty sum of payment.
Email ThisBlogThis!Share to TwitterShare to FacebookShare to Pinterest