pride, prejudice and on being "the best" 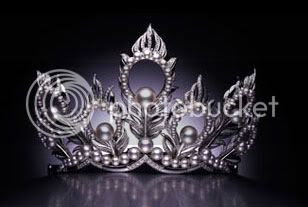 Behold, the Miss Universe tiara (2002-2007). This tiara was created by the international pearl culturer / jewelry house, the Japanese Mikimoto. 500 almost 30 carat diamonds and 120 pearls were used for this USD 250,000 masterpiece. The shape itself reminisces of phoenix rising, the symbol of status, power, and beauty.
A true work of art that befits a woman who has gone through a hard selection and conquered odds to be considered as the most intelligent, the most poise, the sexiest, and of course, the most beautiful.
Indeed, I daren't say that not all of the women chosen for Miss Universe competition are beautiful. But then again, what is beauty? Isn't it on the eye of the beholder? Who is the most beautiful woman in the world right now? Is it Megan Fox? By what, and whose standards?
Even before I danced in "The Dance Within" with Lilith, many people have come to me and said, "You are the best bellydancer!"
I was flattered, of course. My ego was boosted and my head went through the roof. I became ten feet tall and believed I could stomp on other dancers, oriental or tribal.
But lately, it has really become something that gives me the itch. It is really, truly uncomfortable.
I mean, honestly, yes, I do have an ego as big as Jupiter, but one day, when I was browsing the net, I found a youtube video of an oriental dancer who claimed to be the best oriental dancer in her country (and the fact that she once came home as the SECOND RUNNER-UP in the local bellydance competition didn't seem to stop her from using that gimmick: "the best"). I got intrigued, saw the video, and shook my head.
It was bad enough to see her facial expression giving away the fact that she was trying so hard to remember the choreography, but it didn't stop there. Some of her techniques were just way off and I know one oriental dancer also in the same country who dances 100 times better (in my opinion).
She was the one who uploaded the video to youtube and in every youtube video of her and her troupe (that she uploaded herself), she always put "The best bellydancer in X country". Heck, she even put that as her tagline right under the logo of her studio. At least that's what I saw in her website. I've never been to her studio because she's not in Jakarta. She's not even in Indonesia.
So, based on what standards are we considered as the best?
Basically, I think for oriental and tribal, the standards are: techniques, vocabulary of movements, range of movements, knowledge of the dance, costume, make-up, dancing experience, teaching experience, certificates (not necessarily in that order).
Then, in this MTV-oriented world where attention deficiency is everywhere, a dancer needs to keep his or her audience's attention. Props (veil, zills, sword, pot, tray, candle, shamadan) come to mind, so does gymnastic abilities. You know, the sharp-pop-exaggerate-your-maia-lock-fold-your-body kind of thing.
And now, based on whose standards?
Definitely not our OWN standards. We don't live in this world by ourselves. Just one, single, lonely dancer.
Students judge us, spectators judge us, our fellow dancers judge us, our teachers judge us, the youtube judges us.
It just doesn't feel right when you make up a biography of yourself and you dub yourself as the best. How do you know? Who told you that? It is true that you have to sell yourself, your troupe, and the studio that you have, but come on... What if people think of you as a joke?
Whenever someone came up to me and said, "You're the best bellydancer!" I always asked them, "Have you ever seen other bellydancers?" I gave them the names of several troupes and institutions. Some still said I was the best while others succumbed into saying, "The best male bellydancer!" and right away I shot another question, "Have you ever seen other male bellydancers?" and I gave them other names.
Usually they would just smile and say, "Take the compliment, will you?" and I would thank them.
But I still feel some discomfort deep down in my heart. "What if other people think of me as a joke?"
That question nags and nags and nags. My troupe and I always put our best in every performance. Many said we're the best. But we just shrugged it off with a thank you. Possibly because we're trying to keep a low profile and because we're not sure that we are the best. 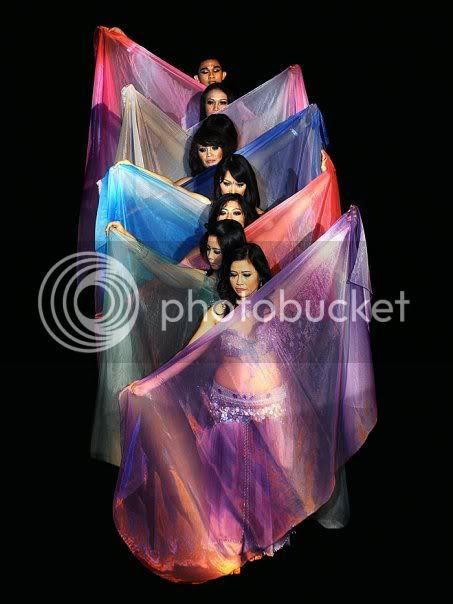 The Velvet Raqs dancing to "Eternal Triangle" by Paul Danna (OST "Kama Sutra")
during "The Dance Within" recital, Saturday, November 21st, 2009, in RRI Auditorium, Jakarta.
Photo by Stef Manfrotto (2009).
We obviously didn't believe it when people say that we were the best when we were just starting out. I mean, obviously our costumes weren't even proper enough to be called "the best". "Good enough"? Yes. "Just good?" Maybe. We don't mind. "Very good"? Why, thank you. But "the best"?
By what standards and whose?
Email ThisBlogThis!Share to TwitterShare to FacebookShare to Pinterest

as shimmied by famousfeline at 06:44:00 boxed in: performances, ramblings 4 comments: 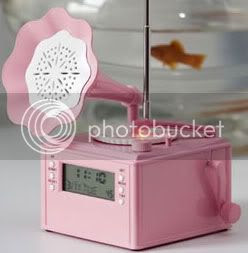 Today was supposed to be a quite seamless day. Everything went well. Even the streets were agreeing. They were relatively empty. In fact, they were empty enough that I could cut at least 20 minutes from my usual one-hour trip to a studio where I teach every Wednesday evening.
I arrived early (regardless of my infamous image of being unfashionably late, I almost never arrive late to teach) and waited for the aerobics class to end.
When it ended, I said hello to the aerobics instructor. She left and I popped in one CD I usually use to build the Oriental atmosphere. When the participants had gathered, I went on my regular routine: asking if there was any first-timer (no one, but there was one lady who had only joined in last week) and explaining the posture - the most important rules of oriental dance so as not to get them injured.
And then I switched on to the second CD - the one I always use to teach, with the tracks organized to form a flowing exercise: first is the warm-up and stretch, second is the oblique-toning figure eights, third is the abs-toning camel and reverse camel, fourth is the abs and obliques with omis and big circles. The cardio begins at the fifth track with the accents, and the sixth track is for the shimmies. The choreography uses the seventh track, and the cool down is the eigth.
The CD was... unplayable. I tried to load, unload, reload, unreload... And still, the interface said: No Disc.
I had no option but to use the first CD. Thank goodness I could use the tracks to also do the toning and cardio (it was at a gym, so almost no art was involved, just really basic things where I can't be too idealistic and perfectionist).
But, alas... The song for the usual choreography was not in the first CD. However, there was this song that I've been trying to do a cutesy choreography with ("Kol Youm fi Omry" by Elissa - a Lebanese pop song). So I explained to them that the choreography would be even more basic and would be a spontaneous one (I wasn't kidding. I was really familiar with the song and had made a few outline steps a few months ago, but that was it).
I just realized... Ohmigod, Elissa again??? My first solo dance was to her "Ayshalak" and a few days ago I found "Ayami Bik" (also by her) and in the middle of finishing a choreography on the song. She's really something else.

"Kol Youm fi Omry" - Elissa
Sooo, with my very, very, very limited knowledge (plus the fact that I had to teach MYSELF and THE PARTICIPANTS a SPONTANEOUS choreography that I might NOT REMEMBER when dancing the SECOND TIME), I danced.
I did a little thing with the Egyptian walk (step, bump, step bump) and modified the step. There were 10 participants and only one (the lady who just came in last week) who kept losing the beat and the steps.
But the show must go on. I went on with the new choreography the second time (it was, thankfully, easy enough even for me to remember the whole thing), and promised the participants that it was going to be the new choreography that they would be learning the next week. I also told the one lady that I would get back to her after the cool down to explain the steps.
And then we cooled down and stretched and I ended the class, took a deep sigh, and gave the lady an extra ten minute to teach her about the step. I still didn't think it get to her, though. But she nodded and I told her with a big smile to practice because I wanted to see her executing the move next week.
Now, note to self: always bring a spare CD, always know a simple song or two by heart (especially if you teach basic beginners or at gyms) so you at least have a basic frame of the beat and can make a repetitive combo, always try to be patient (I suck at this, really, really), and motivate, encourage, and remind them to be patient with their own bodies.
Oh well, now I need to finish the choreography.
Email ThisBlogThis!Share to TwitterShare to FacebookShare to Pinterest

as shimmied by famousfeline at 06:00:00 boxed in: advice and note-to-self, ramblings No comments:
Newer Posts Older Posts Home
Subscribe to: Posts (Atom)