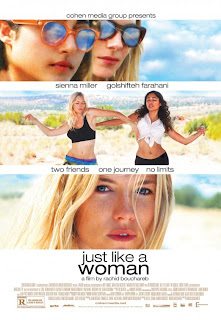 It is a well-known fact that movies that at least try to portray belly dance in a fair way are not that many. In fact, I can only name one that I know of. Then there's Just Like a Woman (SPOILER AHEAD).

This movie came out in 2013, directed by Rachid Bouchareb. It's about two acquaintances, Marilyn (Sienna Miller) and Mona (Golsfhiteh Farahani) who are forced by circumstances to get on a road trip from Chicago to Santa Fe in Marilyn's car. Marilyn goes to Santa Fe to audition for a belly dance company (as recommended by her belly dance instructor, Peter). She's hesitant at first, but then she's fired from her job and comes home to catch her deadbeat husband cheating on her with a pizza delivery girl.

Mona, on the other hand, is an immigrant, and a wife of a very loving husband (Mourad, played by the ruggedly handsome Roschdy Zem) and an overbearing mother-in-law (Chafia Boudraa) who demands to have a grandchild and accuses Mona of being infertile. One night, Mona spills her mother-in-law's pills and yet serves them to her anyway. The mother-in-law dies in the morning, and Mona, overcome with guilt, runs away. She has no idea where to go, but kismet brings her bus exactly where Marilyn is parking her car. The two meet, and Marilyn decides to take Mona with her. 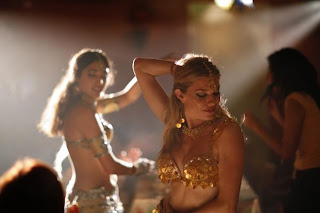 Marilyn (foreground) and Mona (background) dancing at their first gig.

Peter (Marilyn's instructor) gives several recommendations for restaurants Marilyn can dance at. Her first gig actually needs two women (how lucky!). Mona, being a Middle-Easterner, is (supposedly) a natural belly dancer, so Marilyn asks Mona to accompany her dancing at restaurants (one of them looks like a really seedy bar). 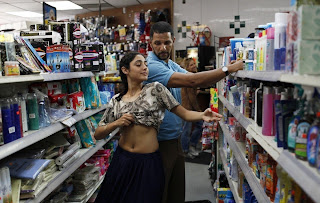 Mona belly dancing to flirt with her husband in their convenience store as Marilyn watches in the back.

The first song they danced to is Hisham Abbas' Nari Narayn and they seem to be just wiggling around. They get paid and the tip money is good, and they think everything is fine and dandy until the Arab patron comes to their rooms (apparently they stay at his place) and demands to sleep with Mona. Marilyn answers for Mona and says she's not interested, then the patron asks to sleep with Marilyn, who, of course, refuses. The patron gets angry and Marilyn decides that Mona and she has to leave. One thing, though, the patron says his clients do not like blonde dancing girls, so from then on, Marilyn wears a wig (this wig later becomes important because near the end of the movie when Marilyn gets physically abused by two rednecks and unable to audition, Mona takes her place and disguises as Mona, wears her wig, and is accepted into the dance company). 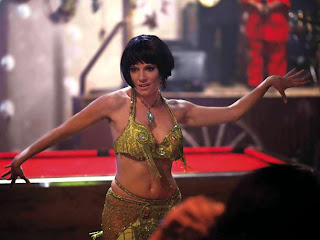 Marilyn dancing at a bar for their second gig.

In the middle of their journey, Marilyn learns that Mona is on the wanted list and she confronts Mona. Mona tells her what happened and Marilyn abandons her at a gas station in the middle of nowhere America, and Mona, not knowing where she is (she's not American, she's never been outside of Chicago, the only path she knows is to get from her house to the store that her husband runs) just stays put in desperation. Marilyn then changes her mind and comes back to get Mona.

I don't know where to start. Some of the costumes just look cheap (but then again, Marilyn is trying to be a professional dancer, so that explains the cheap-looking costumes). Then the very typical music choices... But let's begin. 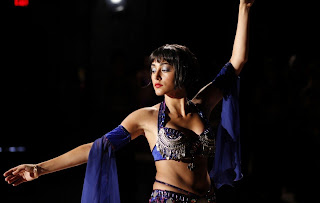 There's no sense of progress in the story. The music and the dancing skills don't progress. Mona shows Samia Gamal to Marilyn, but I don't think that inspires Marilyn. At one point, Mona tells Marilyn to use another song (thank God) and to dance with abandon (YES!) but nothing comes of it. I was hoping that Mona shows Marilyn a thing or two about dancing, about music, about being in touch with the dance itself (so many Middle-Easterners pride themselves for being able to dance to Middle-Eastern songs because those are their songs and so they can be really in touch with their dance because everything flows naturally while non-Middle-Easterners struggle to achieve this kind of flow, this kind of tarab that is discussed in Whatever Lola Wants). Mona doesn't even smile when she auditions and yet she gets the part.

There's no tension when there should be lots of tensions. You have an immigrant (and not just an immigrant, but from the Middle-East, forpetessake, in the USA!), you have the stereotypical Arab people who always blame and degrade women, you have a loving husband desperately searching for his missing wife (who later says she doesn't want him back because she thinks he's failed to stand up for her), you have two cops (one of them is perhaps a racist bastard) whose roles just disappear.

Angles and editing. You know, I have no idea why this movie is rated R. You can hardly even see the dance. The story itself begins way too slow.

The ending. Which is so anticlimactic.

The dance. The dance itself is just meh, most likely because we don't really see what's happening. Then there's also no progression. Actually it gets worse (from an Arab restaurant to a seedy bar? Or is the movie trying to show what the belly dance scene in the USA is really like? Which, if it's true, then it's another missed opportunity).

There are good moments in Just Like a Woman, though. When Mona is left in that gas station and she takes off her coat and stands there while still in a belly dance costume, now that's desperation. The wide shots really inform the audience that she is in the middle of nowhere. Then there's tender moment between Mona and her husband as she flirts with him in the store. Then Samia Gamal. Then Natacha Atlas' Adam's Lullaby (although really, Natacha Atlas? It's been used). The male belly dance instructor (yes!). The fact that there are women of all shapes and sizes and some are even tattooed in his class (YEAH!). Although, both the male belly dance instructor and the other-sized women don't really have a role in this movie. 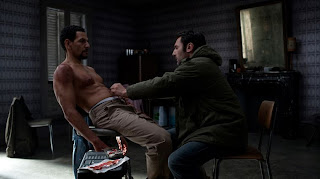 Well, I'll just leave you with this image. Here's Mona's husband doing something I don't know what, unfortunately not from Just Like a Woman (ya think?).