tribal fest 12: year of the unicorn and the emperor's new clothes 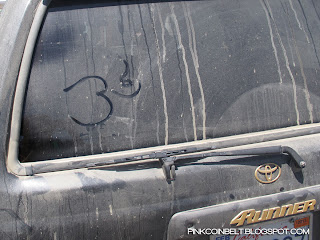 When you see a dirty rear window of a Toyota, with what appears to be an om sign missing its hat drawn on the dirt, instead of something that says "I'm filthy, wash me?" you know you're in another realm.


This time, I didn't take any workshops nor stayed near Sebastopol. Instead, Laura picked Julia and me up at Julia's apartment in Berkeley, and we went from there. We arrived in Sebastopol on Saturday, May 19, 2012, at around 10 AM, just in time to catch Laura Elizabeth's performance.

We only came on one day: Saturday, and boy it was a treat. It was the day of ATS®. We had Ujbaba from Russia (those girls... I've said this once, and I'm going to say this again: Ujbaba proves that no matter how far removed you are from the mother ship, you can still have the ATS® posture and attitude), Spin-Off (Ms. Wendy Allen's student troupe from Alameda, CA), Blue Diamonds Belly Dance (student troupe of FatChanceBellyDance®) and of course, FatChanceBellyDance® themselves.

It was a day of shopping (I finally got two saye goshas that I'd been eyeing ever since last year's Tribal Fest) and Silk Road Tribal did not disappoint. Thank God I didn't have that much money and they were out of red talhakimts, or I'd be more broke. If that's even possible.

Other notable mentions were: Donna Mejia-Ela Rogers-Hilde Cannoodt Intrepid Bodacity, Donna Mejia's solo, Ela Rogers' solo (I finally understood her. She had this... amazing stage presence, and her facial expression was so spot on), Ambush Bellydance (I don't understand why this group is named this way, but they were spectacular), Devi Mamak & April from Ghawazi Caravan (using Flamenco and ATS®, they were moving poetry), and Paige Lawrence (he can actually dance, and this is probably inappropriate, but I don't care: I find him really attractive). That being said, I was busy going in and out and eating with my dance sisters, and so I didn't really sit still and see the whole show.

And we took off earlier for dinner at Infusion Cafe (or something - great tea, but the food was total rip off, and it took them ages to make our dinner, and they let two crazy dudes in: one was playing the guitar in the parking lot and then came into the cafe, STILL PLAYING THE DAMN GUITAR, and the other was high beyond belief. The high guy was spotted at Tribal Fest too). So I missed this (somehow NSFW):

Read more »
Email ThisBlogThis!Share to TwitterShare to FacebookShare to Pinterest

as shimmied by famousfeline at 10:35:00 boxed in: ats - its - tribal, female dancers, male dancers, other dances, ramblings 2 comments:

Okay, so I apologize. My last post was 128 years ago. But I have reasons. Well... Had. The Spring 2012 semester was a bomb. The hours weren't fun at all. But, I'm alive. And in two weeks, I'm heading home. I'm so excited. My boss, Mifta, has lots of plans for me: hafla, performances, out of town workshops, so I can't complain.

Dance wise, this semester has also been very, very fruitful. I went to Rakkasah in Richmond, then to Tribal Fest 12 (my second!), but each of them will have its own entry. Or at least one entry for both where I'll compare them.

But this entry won't talk about Rakkasah or Tribal Fest. This entry will talk about the annual National Dance Week showcase at the FatChanceBellyDance® studio on Saturday, April 14, 2012 (which was 72 years ago). And I happened to dance there, as Blue Diamonds Belly Dance, student troupe of FCBD®.

Here's the snippet of the performance in the first set, to Caravan by Raquy & the Cavemen. Guess which one is me.


Well, I guess this post breaks the lazy spell.

Come to think of it, this entry won't have anything much, because, I'm too lazy letting the video do the talking.

Last year, I went to the National Dance Week / Observe the Creative Process at the studio. I was... blown away by the performances. I was blown away by the students were so graceful and powerful at the same time and those were students except for Ms. Kristine Adams & Ms. Anita Lalwani who perfected the icing on the cake by dancing to the crazy fast song called Drum Solo 2:31 by the adorable Tobias Roberson (cue le sigh here). Some of the ladies have become my friends, and I have to tell you that I am blessed to have them as my dance sisters. When I got back after the show, I told myself that I needed to work my ass harder to have at least half their skills.

Then this year, National Dance Week happened again, and the studio once more opened its doors for observers, and the students put on a show.

Needless to say, I was happy. I still am happy as I'm writing about it 2 months later. And I'm glad that I shared a session with Yuka, whose husband Ben took the video, though mostly because Yuka's there, but that's not the point. The point is: I was there and I danced there and even though it was hot and I had to ride the bus back home with my make-up on, an old lady told me that I looked beautiful, I was happy.