One of my friends who also belly dances sent me a message through the ever-practical-really-useful Facebook *sighing longingly at Mark Zuckerberg's picture*.
Apparently, the Belly Dance Festival Asia 2010, which was originally going to take place in Malaysia, is relocated to... *drumroll...*
INDONESIA!!!!
Well, not exactly in Jakarta, though. I mean, come on. Jakarta's filled with big yaks of hypocrites. Where else would a belly dance festival take place but in Bali?
The perfect excuse to get on a plane and see my boyfriend (he lives in Denpasar). 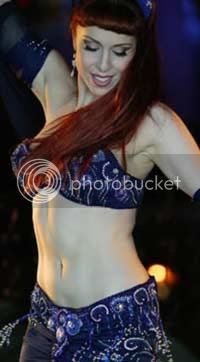 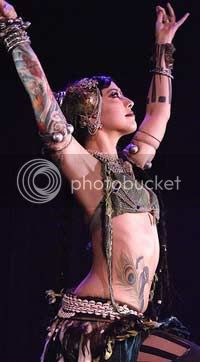 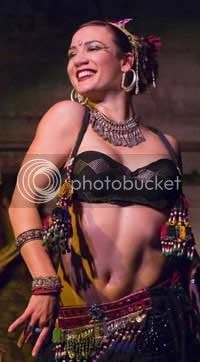 Jillina, Sharon Kihara, Elizabeth Strong
So, on February 25th until 28th, Indonesia will host Jillina and the Belly Dance Evolution. That's like... four freaking days of workshops. I'll obviously be taking lessons from Sharon Kihara and Elizabeth Strong. There's one particular workshop by Louchia - the Armenian Dance that I'm interested in joining. And for the closing is the gala dinner and show by Jillina and the Belly Dance Evolution.
To tell you the truth, I'm happy. Really, I am. I mean, I get to see Sharon Kihara and Elizabeth Strong! And learn from them! I pass Jillina's workshops. I mean, seriously, I'm not on her level. I'll let my teacher, Ms. Miftahul, learn from her (she's a big fan of Jillina's) and cascade the lessons down to us. Hopefully Jillina won't be as gruesome as Sadie. Earlier this year, Ms. Miftahul went to Malaysia to take Sadie's workshop and she came back drilling us like crazy. I'm telling you, the amount of sweat and pain almost killed us all.
However, yeah. I'm happy but I'm not ecstatic. I was already planning to go to Malaysia for the Belly Dance Festival Asia 2010 and a huge reason was because of Ansuya. I don't know why, but she's not coming to Bali for the workshop. Ozzy's going to be there, but no Ansuya.
I've said this many times before and I'm going to say this again. Ozzy is a hottie.
But then again, NO ANSUYA!!!
She's like... the epitome of American Oriental. Okay, I don't know where she's heading with all her cabaribalusion thing, but I really enjoy her dancing. Just like I enjoy Anaheed's and... well... Most American Oriental dancers in general.
The Belly Dance Festival Asia 2010: Shimmy in Bali is proudly presented by The Haremqueen Dancers and Magnificent 9 Production. I've heard about Haremqueen for sometime now and I'm so happy that they're doing this for the sake of Oriental (and Tribal) dance in Indonesia.
To all belly dancers in Indonesia, I'm not going to overrate Jillina or the Belly Dance Evolution, but this is the time to really spend your hard-earned money and invest on the workshops.
Email ThisBlogThis!Share to TwitterShare to FacebookShare to Pinterest

as shimmied by famousfeline at 22:26:00 boxed in: ats - its - tribal, oriental, workshops and globetrotting studies 1 comment:

"The Dance Within", the first annual recital of DanceWave Center Jakarta, was a success. We danced in front of a sold-out audience. It was just too bad that some who had bought the tickets didn't come to the show.

There were mishaps with the lighting and the sound, but in overall, the audience was impressed. We got great reviews and we're currently attaining the feedbacks from people for the post-mortem evaluation.

That evening, I danced three times. The first one was in the first act, I danced with our professional troupe, The Velvet Raqs, with veils to "Eternal Cry" from Kamasutra's Soundtrack and "Ice Queen" by Paul Dinletir. Up next was Lilith and I dancing a Balkan number to "Fanfara Mocvara" by Figli di Madre Ignota. The third one was a hip hop vs. oriental dance battle to a Middle-Eastern influenced hip hop song by Che'Nelle called "Teach Me How to Dance".

In the battle song, the hip hop and the oriental troupes demonstrated that there are several movements in hip hop and oriental that look alike and follow the same principles. These movements, although alike, are fairly different, yet can move together in harmony.

Okaaay, so I danced four times. The last one was a cheesy dance number that I choreographed as the closing dance for all performers to dance to. It was cheesy, really fun, and really easy. It was so High School Musical type of dance to "Dance Little Lady Dance" by Tina Charles.

I got flower bouquet from a dear friend, three kisses from my boyfriend, a big hug from Mom when I got home (the entire family watched the show), and loads and loads and loads of fans who asked me to pose for a picture with them. Of course I tagged Lilith along. She deserved the credit as well!!

Anyway, I'm glad we can put the show behind us and still bask in the afterglow of the spotlight. Here's a picture of me balancing Lilith on my head. 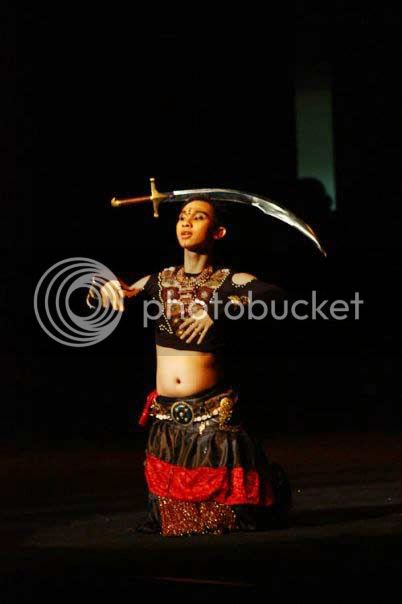 Photo by Troy Norman (2009)
Next stop, Las Vegas!
Email ThisBlogThis!Share to TwitterShare to FacebookShare to Pinterest