where i stand on this cultural appropriation thing

First of all, let's just make it clear of what I mean with "cultural appropriation".

These definitions are from Google Dictionary. For this case, let's discard the third definition and add the word "cultural" in front of it, thus making the meanings of "cultural appropriation" something like this:
For the first definition, many have also added that those who culturally appropriate belong to the dominant cultures (typically the Caucasian), but sometimes, I don't think that's the case.

The thing is, during my free time, I don't go out and take long walks or run or enjoy the great outdoors. I'm not an outdoors person. The sun ruins the skin. During my free time, I browse the internet. Sure, I get caught in the weird part of the Internet from time to time, but anything's wonderful as long as I don't come across pictures or stories of animal abuse.

Time and again, I found posts that disrespect (that's a really pejorative term in many cases) belly dance, its culture and origin (which no one really knows), and those who perform the dance.

Let's focus on the Tribal bashers (the Trishers? Tribashers?). What's really disheartening is that if you go on forums like Bhuz or Tribe.net, you'll see Oriental style dancers bashing Tribal, saying that Tribal is not belly dance. And it's cute (okay, it's not) when you see that in some of their posts, these dancers refuse to call themselves bellydancers because they think the term "belly dance" and "belly dancers" are demeaning. They do Middle Eastern dance. They do Oriental dance. They go to Egypt or Turkey to study with the greats and try to keep the art form intact. They don't like the term "belly dance" yet they tell Tribal dancers to use whatever name but not belly dance. 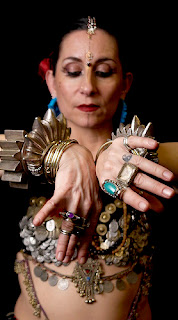 But wait, turns out, these Oriental dancers actually use "belly dance" to promote their work, albeit with a cringe, because it's easier to get their point across.

I won't discuss that in detail and I don't really pay attention to those posts because, well, the posters have made themselves look and sound ignorant.

The thing that really gets me is the constant telling that Tribal style belly dance and especially ATS® are considered cultural appropriating.

Okay, I get it. ATS® has indeed borrowed lots of elements from different cultures across the globe. The Puja for one is an adaptation of East Indian prayer, then Megha Gavin from Devyani Dance Company expanded it (I don't know Ms. Gavin that well, but I do know that she is knowledgeable in Indian culture and philosophy) and FatChanceBellyDance® adapted the extended Puja, which I have yet blogged about. I'M SO SORRY. IT'S COMING ALONG!

Then there's the jewelry (Afghani, Yemeni, Pakistani, Kohistani, Turkoman, Kuch), make-up (facial tattoos inspired by the Berber, the Ouled Nail; bindis from Indian culture), costume (India, Middle East), music selection (too many to mention, from folkloric Bedouin to contemporary Balkan to modern beatboxing, and we play finger cymbals too), and of course the dance itself. 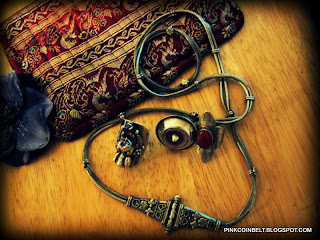 Full disclosure: I'm an ATS® belly dancer. I don't have that much money, but when I do, I use it to take dance classes and buy dowry (which includes jewelry and costuming bits and pieces).

For the jewelry, again, since I don't have that much money but I need to get that chunky, more is more look, I sometimes have to opt for cheaper jewelry. I mix and match cheap and plain silver bangles with the monster ones that I've carefully tried to research. I own several pieces of Assuits, only one of them is more than fifty dollars including shipping. My prized possessions include a Tuareg spike and dome ring that I bought from my friend, the amazing dancer/photographer/hair-flower-creator Shelly Swanegan Hamalian, a gold-washed Turkoman ring from Sirik.com, a Carol Felley cat with Amethyst ring (my birth stone is Ruby, but I'm really drawn to Amethyst), and a silver hip chain from NakaRali (I bought this one at TribalFest 11 and I'm still broke now). I wear the cat ring because I'm crazy about cats. Plus, it's silver, it's huge, and it fits in the more is more aesthetics.

For facial tattoos, I use the chin line and the three dots near the outer corner of each eye. I stopped wearing the dots over my eyebrow because I learned that it's used for Indian brides. I'm not a bride, nor am I Indian, although you know, when (I'm not using "if") John Abraham proposes, I'll be one, and y'all are invited to the wedding. In this video, Ms. Nericcio clearly states that bindis and facial tattoos in ATS® are purely ornamental. Also, go here for more information on facial markings.

I wear turban when I dance because my hair is short (and I've a small head) and I need something to stick the flowers on. Also, as androgynous as I want to be, men do wear turbans, and in a way, my turban can both conceal and show that I'm a dude.

Does that make me, an ATS® belly dancer, a cultural appropriator? I guess for some people, yes. But I do know my limits, because I know which elements I need to use, which elements I can go without, and not only because of aesthetic reasons. Having knowledge and information on the things we wear and create (and for some, the things we eat) is one of the ways to adopt a culture and promote its beauty. If you go to FatChanceBellyDance® studio, you'll see stacks of books about tattoos and jewelry and textile. Those ladies, especially Ms. Nericcio, know their trade.

But many ATS® dancers (I'm not saying all) are well aware of the origins of the jewelry they wear. Some of them can even point the places out on the world map. Some have even been there. These dancers help expose the world to a culture rich with tradition and exquisite jewelry (and then some), which means more production, more income, and eventually more revenue to the craftsmen and the overall tourism industry.

At the Indian and Vedic Culture miniseminar several months ago, Ms. Colleena Shakti said that the NakaRali silver supplier and craftsmen had doubted that their products would sell well in the USA (and subsequently, the world), because they had low demands in India. More and more young people in India prefer the more modern (and sometimes cheaper) jewelry. This stroke a chord. Many Indonesians, I for one, don't wear traditional clothings or promote the traditional jewelry, which by no means is less exquisite than Indian jewelry. 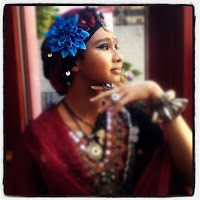 In Evolutions: The Exotic Art of Tribal Bellydance, Zoe Jakes talks about her costume and jewelry inspiration. One of the pieces she wears is a heart-shaped pendant from Java. Is it a religious symbol? I don't think so. What if it is? Should I care? I don't think so either. Is she culturally appropriating one culture from my country? Maybe. But here's what I do know: when I heard Zoe said "Javanese", my heart leapt with pride. She's an international performer and I don't care that I sometimes don't like her style, but she promotes something from my homeland. Also, every time I hear songs that incorporate musical instruments from Indonesia, I feel honored, I feel respected.

Heck, I was ELATED when I saw Kecak dance in The Fall (frigging awesome movie, by the way. Very beautiful, very strange, very surreal, very emotionally exhausting, with Husband #16 Lee Pace in it).

Also, another thing. There's this Tumblr blog that bashes people wearing Native American headdress. I get it. The thing is, the same writer said that he celebrated Halloween, which is a Celtic tradition and is nowadays commercialized (like Christmas and Easter and the Eid). So, double standards?

My friend Julia sent this link to a great article (the conclusion is, it's hard to draw the line as to what exactly is "cultural appropriation", but the rule of thumb is to not wear something that has a deep symbolic meaning like a war bonnet, nor something that has religious meaning like the Rosary, and always make sure that the craftsmen get respectable cut because, well, they need the money to keep producing those gorgeous items. By the way, in terms of turbans vs. war bonnets, you know, many turbans are worn because of the functional purposes).

Well, I'm beat. I was supposed to do my homework, but I really felt that I needed to get this one out first.

Man in orange and green turban photo is taken from Pink.City.Mag and check out its page on Turbans!

as shimmied by famousfeline at 22:25:00 boxed in: accessories and costumes, advice and note-to-self, ats - its - tribal, fcbd, instructional videos, make-up, oriental, ramblings

As always, some interesting thoughts.

those kind of bashings of tribal that occur on bhuz are exactly the reason why I choose to stay out of the discussions there and view the atmosphere as generally not being friendly. I m sorry for it, but the people accusing tribal for stealing and fusing things that should not be fused are doing the exact same thing, they just don t realize how different their version of the dances is when compared to their "origins".

personally, I did not stumble upon bellydance in the middle east, I have stumbled upon it in Zagreb, Croatia and learned it from croatian and american/european teachers mostly.

this is as much my dance as it is somebody elses, and I won t be scared of expressing myself and developing the form so that I can obey rules from abroad.
western bellydance simply isn t the same bellydance you have in egypt, turkey or the middle east and can not be as much as anybody claims to have copied the style perfectly.

I am a cultural anthropologist by vocation and it really looks silly to me, the idea that we should take a piece of someone s culture and plant it in our countries to live in a cultural vacuum of sorts. it can not happen. only natives from abroad can make that and more often than not, they are less worried about these issues than us in the western or dominant cultures.

dance is authentic if performed well, and in that way it is universal.

That being said, I can understand the conundrum you're facing. However, you have to know that "Egyptian Style belly dance" is not something that can be categorized and boxed.

So perhaps you should ask your Egyptian-style dance contemporaries there, "What makes one style of belly dance Egyptian?"

And I'll bet that if you ask each of them on separate occasions, they will have different answers.

Having a contemporary dance background should enrich your belly dancing, not hinder it from growing. Tahia Carioca learnt ballet for ten years before learning belly dance.