I know I was supposed to blog something about sword care and all the hooplah, but one night when I was struggling with my insomnia streak due to the fact that I slept all day long, I went to IMDB to search for news about the movie I've been anticipating for about a year now: Whatever Lola Wants. 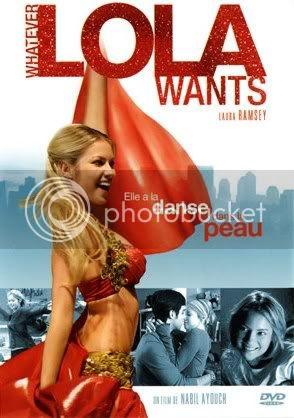 Whatever Lola Wants is a film by Nabil Ayouch, a Moroccan film director and it is Mr. Ayouch's first (or is it second? I don't know, IMDB and Wikipedia give me conflicting data) attempt in creating a foreign movie. The original film is in English starring Laura Ramsey (Lords of Dogtown, She's the Man) as the title character.

Whatever Lola Wants tells the story of Lola, the New York postal worker who also tries to have a career in dance (she auditions, takes jazz dance trainings) but never succeeds. Until one day, her gay Egyptian friend, Yussef (Achmed Akkabi) shows her the video of Ismahan (Carmen Lebbos), the legendary bellydancer from Egypt. Ismahan was once famous but became ostracized because of her affair.
While delivering mails, Lola meets Zackariah Akef (Assaad Bouab), an Egyptian man living in New York. With a little help from Yussef, Lola finally gets to know Zack. However, Zack leaves Lola because he has to return to Egypt. Needless to say, Lola follows him, much to the disapproval of Yussef who says that Egypt is not a country for a woman. He's gay and that makes him even worse than shit ("Je suis pede et donc je suis pire que merde"). But Lola has made up her mind and is going to Cairo.

In Egypt, however, Zack disapproves of Lola's passion for dancing, saying that no good Egyptian woman dances in clubs. After Zack leaves, Lola begins her search for Ismahan, begging to be taught by her, and later winning her respect and becomes a star. 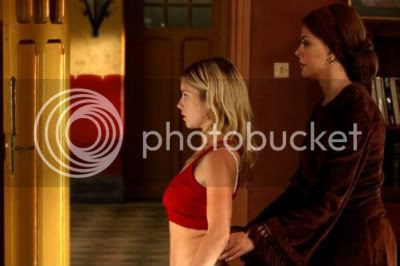 The movie has a happy ending (I cried tears of joy). The version I downloaded (yeah! But I will buy the original! I promise!) is in French. And thank goodness all those years of learning French, including a six-week homestay stint in Nice, France has finally paid off. I understand almost all dialogs but I am still going to need to buy the original DVD because it has the original version which is in English. UPDATE: I have purchased the DVD and found that the French version is actually better.
There are so many cool characters in the movie, especially Adham (Nadim Sawalha), Ismahan's butler who is also her friend, number one fan, and the vanguard of her sanity. Adham at times enlightens Lola over why Ismahan's behaving the way she is.

Needless to say, Whatever Lola Wants is a very good movie. It has everything. It has the hard transformation from a stiff jazz dancer into a flowing, elegant bellydancer (Ramsey has done a fine job, and although I personally think Morocco - like Suhaila Salimpour - is way overrated, she has also certainly done a great job in creating the choreographies).

One of the most memorable scenes from Whatever Lola Wants

It shows what Egyptian people think of women who dance (sharmootah/ prostitutes) and yet have double standards about it (as shown in the Nile Tower where the best and the most authentic bellydance is performed - including later by Lola), it shows how Egyptians think of foreign women who dance (stealing their profession although later can be befriended), it shows how Egyptians think of homosexuals (I only heard about it, but somehow it makes me feel reluctant to go there and learn Raks Sharki, although Ms. Maria Aya once told me that they wouldn't do anything to tourists or foreigners), it shows a glimpse of Egyptian culture as well (albeit more modern cultures).

But most importantly is how the movie tries to explain what exactly is belly dance. In her speech after she dances on the last night of her performance before returning to New York, Lola says that bellydance, the dance that is very important to Egyptians, has become an important thing also to her. And she adds that it's why she's returning to New York to share the joy of the dance with Americans.

Through Ismahan, Lola finally discovers what tarab is. It is the soul of the music, of the dance. In Indonesia, we call it taksu: the life of the art. Each work of art has its own breath, its own life. As artists, we are responsible to give life to our work of art. Dancers do that with their bodies. Tarab is shown not only through the facial expressions, but also through the movement. But tarab doesn't stop only in one person - the artist. Instead, it is transferred to the audience. If the artist can make the audience feel the tarab, then the artist has succeeded.

There is also a very important point that is being made by Ismahan when she teaches Lola. When you dance, you dance for yourself. Never, ever, dance for a man. 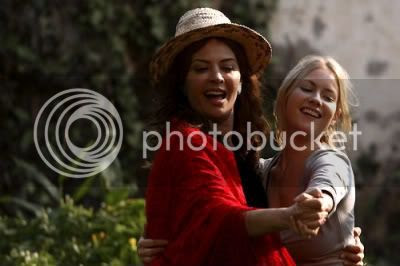 Another thing that I would like add is the fact that thousands of bellydancers and nonbellydancers around the world has anticipated this movie since we first heard the buzz in December 2007 during its premiere in the Dubai Film Festival. However, it fails to attract more major film promoters. I have tried persuading some friends who work for the Jakarta International Film Festival to show this movie, but I don't think it'll ever be shown.

There is one cineplex who claims to be idealistic and promises to show independent and lesser-known movies, but I think (and I accuse that) it succumbs to capitalism (which can be a good thing) and will never play Whatever Lola Wants. The cineplex network here plays the cheesy High School Musical, Honey (seriously, I hate that movie so much. I don't think Jessica Alba can dance), and can you believe they have Step Up 2??

The poster of "Step Up 2".
*gasp* I see the girl baring her belly but it's okay because it's not bellydance! 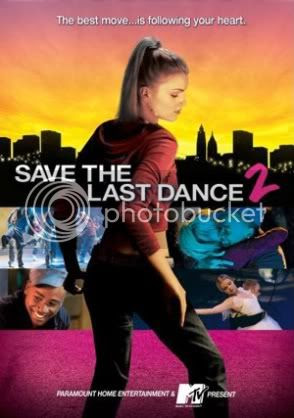 See? I'm not joking.
And it's released by none other than the great, M(indless)TV 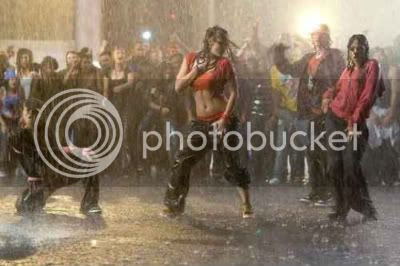 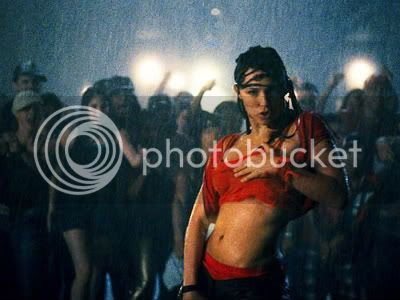 These two pictures show a scene from Step Up 2. See the girl in red? She's dancing in the rain with a cropped tank top that clings to her skin because it's wet. She's also baring her belly, and oh, grabbing her left breast.
You'll never see that (touching oneself with that kind of facial expression) in real bellydance, like the one shown in Whatever Lola Wants. 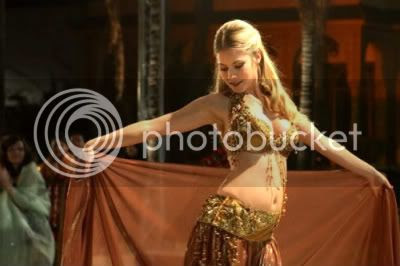 But all in all, watching Whatever Lola Wants is really the cherry on top of a fine day for two reasons: first is finally watching a dance movie that is honest and speaks a lot on my behalf (bellydance and homosexuality) and the second one is I finally got a chance to (forcefully) practice my French.

By the way, my boyfriend and I recently watched the movie Ready? OK! about a boy who defies the norm of a Catholic School he's in that says boys can't be cheerleaders. That boy's definitely gay (I just adore him. He's like Ugly Betty's Justin!) and it has a happy ending too! Now that is an even deeper and more conflicting movie than Billy Elliott.
Email ThisBlogThis!Share to TwitterShare to FacebookShare to Pinterest

as shimmied by famousfeline at 02:55:00 boxed in: female dancers, movies, oriental, other dances, ramblings

I stumbled into your blog on accident and ended up reading to the point that I am going to watch Whatever Lola Wants.
Very nice review.

Thank you for the review--I'm definitely going to check this out!

What did you prefer about the French version?

Hi, Misha. Probably two things. One is because I watched the French version multiple times before seeing it in English. I also felt the French voices matched the characters better.

I have just downloaded iStripper, and now I can watch the sexiest virtual strippers on my taskbar.