I met Lilith at TribalLine.com. She was the last of the owner's stock for that period. The owner, Merilyn, was so helpful that even when I had problems with PayPal due to some technical difficulties and absurd stupidity (you don't think it was possible, do you? Well, think again), she promised to keep Lilith for me.

On 21 January 2009, I finally got her in my arms. Some tips for those living in Indonesia and expecting a really important package that you simply have to track by the minue, apart from tracking the item using the website of the delivery handler (DHL, FedEx - Merilyn used the Australian Post), you can simply go to Pos Indonesia's website and use their tracking system. It actually worked.

Actually, it was Pos Indonesia's tracking system that informed me that my package was sitting at the post office because Mom refused to pay a helluva amount of money (about USD 100) for the custom. I went to the post office that day and the next day during lunchtime to settle the bill. When I got there, it was not USD 100, it was only USD 10. Well, still a lot of money, but better than USD 100. I had no idea how it could get mixed up.

Also, when you're picking up a package at Pos Indonesia, always, ALWAYS ask for a valid receipt, with a stamp and a signature and all the works. Thanks to Anisa for this advice.

As soon as I got the then unnamed sword, I balanced it on my head, all the way while driving back to the office. 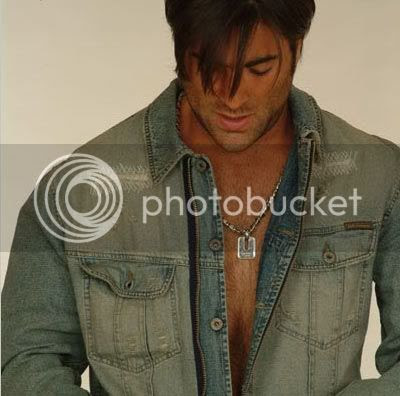 I have two songs in my head that I feel are perfect for sword dancing. The first one is by Wael Kfoury (such a hot, hot Lebanese hunk) entitled "Aahat". If I'm not mistaken, "Aahat" actually means "heard" in sanskrit (as opposed to "Anaahat" meaning "unheard). Ansuya uses the song for her floorwork piece in the Bellydance Superstars Live in Paris performance.

The song is only 2:55 minutes. Short yet dramatic.

The other one is a haunting number by Massive Attack, "Inertia Creeps". Now this is a very long song. I might do this one when I have enough vocabulary of movements in sword dancing and enough agility to balance the sword for about five minutes.

There are several reasons why I chose this type of sword. To be correct, it is actually a scimitar because of its shape. And based on my research, it might be the Turkish kilij. The dance community will know it as the Balady Sword, a smaller replica of the legendary Cas Hanwei sword.

I chose the kilij because it is actually affordable (unlike the Saroyan), it looks gorgeous and fierce at the same time, it gets terrific reviews, and it is available at TribalLine. TribalLine is based in Australia, a lot closer to Indonesia than the USA and it promises to send to everywhere in the world, and it has kept its promise. 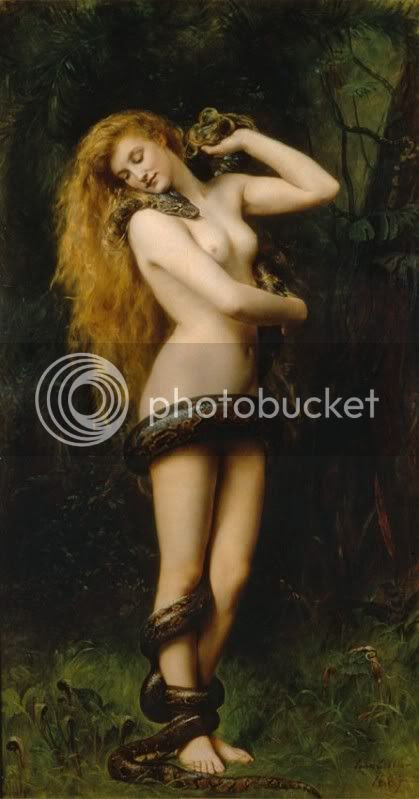 Not so while ago, I christened the scimitar "Lilith". In Judaism, Lilith was Adam's first consort. However, she refused to lie underneath Adam during copulation because she believed that she is equal, not inferior to him. A fight erupted and Lilith abandoned Adam and Eden to the edge of the sea where she was said to become a demon and gave birth to baby demons. Even the two angels sent by God after Adam's whinings couldn't bring her back because her mind was set. But they finally made an agreement about demons and human babies.

Now, scholars and feminists have placed Lilith as an archetype of strong-willed women. She was the victim of patriarchy and served as a scary bedtime story for intelligent women who just couldn't keep their mouths shut. I am sure lots of women - even today - share Lilith's burden: to be called a demonness, to be cursed, to have to run away.

Remember Sarah McLachlan's "Lilith Fair"? The music and arts event was designed to celebrate women in music. Strong, intelligent women. Lilith is now a name that is synonymous to emancipation and fierceness.

And so I named my scimitar "Lilith". In the story, you'll also find that Lilith slays human babies, except when the human babies wear the amulets bearing the names of those two angels that tried to get Lilith back to Eden.

I hate babies and children, so it just seemed like it fell into place. Ha!

My first time dancing in public with Lilith happened on April 1st, 2009. It was during a surprise party for one of the general managers. His wife takes classes at the Interlude Dance Academy under the tutelage of Ms. Venyci Yefriadi. The GM's wife invited me to dance and I said yes and I would try to dance with my scimitar.

It was in Samarra, one of the most popular middle-eastern eateries in Jakarta and there, I met my other general manager and the financial controller. Thank goodness Friday, April 3rd, 2009 was my last day at work (I'll tell you about it later). So I danced my heart out. 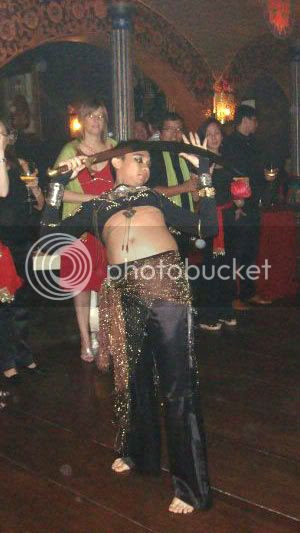 I so hate my belly here. That's what no gym in three weeks can do to you!
Photo by Mrs. Suci Shipman.

It was almost perfect, but when I did my turns and rolls on the floor almost at the end of the song, my Lilith fell! Of course it was my mistake since I kind of tilted my head and hadn't isolated properly. But something unbelieavable happened: the guests, most of whom are complete strangers, wanted more!

The CD only contained that one song, "Aahat", so it got played again, and this time I improvised. And on that second time, Lilith stayed still on my head (and my thigh). I still can't believe the amount of praise I got. It just felt so underserved, especially because I flunked on the first try.

We all danced again with Ms. Ve at the end, and thank goodness I knew the songs, so I could improvise good enough.

Well, Lilith is now officially out and about. I hope in the next hafla (sometime in June or July), I'll get to dance with her once again.
Email ThisBlogThis!Share to TwitterShare to FacebookShare to Pinterest

as shimmied by famousfeline at 21:30:00 boxed in: advice and note-to-self, ats - its - tribal, performances, songs and lyrics, splurging spree, sword dancing